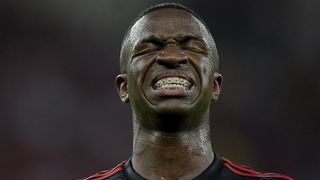 Vinicius Junior said he hopes to emulate the success of Ronaldo and Ronaldinho in Spain as he gave a tearful goodbye at his final Flamengo news conference.

The 17-year-old is set to join Real Madrid for a reported €45million after scoring 11 goals in 51 league appearances for Flamengo since making his debut in May 2017.

He predicted that the adjustment to Spanish football tactics would be the most challenging aspect of his move, while paying tribute to the club that gave him a start in the game.

"I'm saying goodbye to the club that I love very much," he said. "I'm going after more dreams in my life.

"All people who love me are always by my side. I managed to realise my dream here in Flamengo.

We also said goodbye to our Vinicius Junior. Thanks for everything and good luck, Vini! June 26, 2018

"To end happy with the fans screaming my name, in the crowded Maracana, I leave here honoured and happy.

"I am saying goodbye to the club that did everything for me to fulfil my dream of playing for Real Madrid.

"I am dreaming of doing the same as Ronaldo and Ronaldinho in Spain. The biggest challenge will be tactical but I can improve and turn into a great player."

Flamengo president Eduardo Bandeira said he hoped Vinicius would fulfil his potential, both at Madrid and in the Brazil national team.

"We hope for his success in Real, certainly in the Selecao too," said Bandeira.

"Unfortunately, Brazil is a peripheral country; we have difficulties keeping our best players."