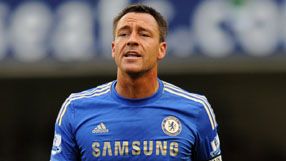 Terry, 31, was found guilty by a Football Association (FA) tribunal of using a racial slur towards Ferdinand during a Premier League match at Loftus Road in October 2011.

The centre-back was acquitted in a court of law for the same offence and always maintained his innocence but apologised on Thursday for the language he used in his altercation with Ferdinand.

European champions Chelsea released a statement saying they had taken disciplinary action against the former England captain, but did not reveal the details of any additional punishment.

"After careful consideration, I have decided not to appeal against the FA judgment," Terry said.

"I want to take this opportunity to apologise to everyone for the language I used in the game against Queens Park Rangers last October.

"Although I'm disappointed with the FA judgment, I accept that the language I used, regardless of the context, is not acceptable on the football field or indeed in any walk of life."

The Chelsea captain will now miss Saturday's match against Tottenham Hotspur at White Hart Lane, as well as two matches against Manchester United, including a League Cup tie, and a trip to Swansea City.

Terry, whose defence was described by the FA commission that banned him as "improbable, implausible and contrived" had two weeks to study the full written reasons for the decision.

Chelsea welcomed his decision to let the matter lie and said they were imposing their own sanctions on the player.

"Chelsea Football Club believes John Terry has made the correct decision by not appealing against the FA judgment relating to language he used at the QPR match last October," the club said in a statement on their website.

"Chelsea also appreciates, and supports, John's full apology for the language he used. The club firmly believes such language is not acceptable and fell below the standards expected of John as a Chelsea player.

"Chelsea enjoys support all over the world. We have players and supporters from many different countries and cultures and our club is committed to eradicating all forms of discriminatory behaviour. John is fully committed to continue supporting that ongoing work."