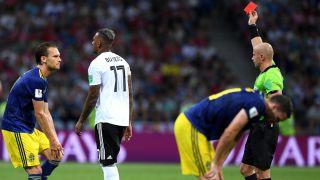 The defending champions stunningly slumped to a group-stage exit in Russia after losses to Mexico and South Korea.

It marked the first time since 1938 Germany failed to go beyond the first round at the showpiece tournament.

"The team has got leaders but the leaders were preoccupied with themselves," he said.

"I am thinking in particular of the Bayern Munich players – Boateng, Hummels, [Manuel] Neuer, Muller. Apart from Manuel I believe that nobody can be happy with his performance.

Despite being contracted until 2022, Low's future at the helm of Germany remains uncertain.

While Matthaus praised the 58-year-old, the 150-time international said Low got it wrong with his squad selection.

"I am a fan of his. In the last 12 or 14 years he has characterised the German football and Germany," he said.

"He didn't only lead Germany to the World Cup but also they reached the semi-finals in every tournament. There is nothing to reproach him for in all of his past – apart from this current tournament.

"In my opinion, he didn't find the right mix in the team between the Confederations Cup-winning team and the World Cup winners from 2014.

"It was actually a team who didn't have a chance of keeping up physically with the Mexicans and South Koreans, especially their pace."