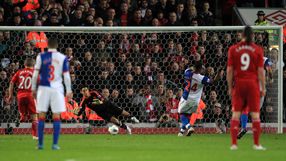 Jones, whose young son Luca died of leukaemia late last year, was thrust into the spotlight at Blackburn Rovers in midweek when Doni was dismissed for bringing down Junior Hoilett in the penalty area with Liverpool leading the Premier League game 2-0.

The Australia international's first job was to save Yakubu's spot-kick, after which he raised a finger to the sky.

While he was twice beaten later in the 3-2 victory, once from the spot after he escaped a red card after a fumble, his performance and composure so soon after a personal tragedy impressed manager Kenny Dalglish.

"You can only guess what it must be like to go through what he's been through, but he has done and I'm sure he enjoyed his first bit of action on Tuesday night, saving a penalty," Dalglish said of Jones, who was signed from Middlesbrough in August 2010 but has rarely featured.

"We know that to do what he's done has shown a great deal of strength of character."

Doni's appeal was rejected by the FA, a statement from the English governing body said on Thursday.

With regular keeper Pepe Reina also suspended following a recent sending off against Newcastle United, Liverpool have recalled youngster Peter Gulacsi from a loan spell at Hull City as backup for the semi-final at Wembley.

While it will be an emotional day for Perth-born Jones, it will also be a poignant occasion for the club on the weekend of the 23rd anniversary of the Hillsborough tragedy in which 96 Liverpool fans died at an FA Cup semi-final against Nottingham Forest.

Dalglish was manager on that occasion in his first stint in charge and said it was fitting Saturday's semi-final was against Everton, the team Liverpool beat to win the FA Cup final in 1989 just weeks after the shocking events in Sheffield.

Saturday's match will be preceded by a minute's silence.

"A minute's silence at Wembley - it's ironic that it's Liverpool and Everton at Wembley again because that was the final that year," Dalglish told a news conference on Thursday.

"It's going to be very emotive for everybody. The Evertonians were affected by Hillsborough as well as the Liverpool fans, with family members who never came home.

"It will be poignant and I'm sure both sets of fans will grace the minute's silence with the dignity they've shown since 1989."

Liverpool, who won the League Cup earlier this year but are eighth in the Premier League, parted company with Director of Football Damien Comolli earlier on Thursday.