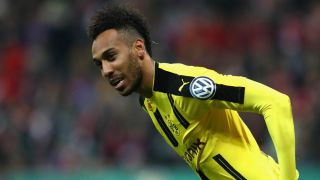 Chinese Super League side Tianjin Quanjian revealed they are poised to sign a player from Europe, but refused to confirm whether it is Borussia Dortmund star Pierre-Emerick Aubameyang.

Aubameyang has been linked with a move away from Dortmund, having made no secret of his desire to play for Real Madrid, however Tianjin Quanjian – led by Fabio Cannavaro – have emerged as a possible destination.

Tianjin Quanjian, who have been constantly linked with Chelsea forward Diego Costa, addressed those rumours and were coy in response.

"Basically, a decision on which player we are going to buy in the summer has been made. And we have secured a verbal agreement with the player as well as his club," Shu Yuhui told reporters.

"We have not signed a formal contract yet, and I will not reveal the player's name during the sensitive period.

"The club have once got the short end of the stick after our transfer target was exposed ahead of time. So we won't say his name."

Aubameyang has scored 29 Bundesliga goals this season, and 37 in all competitions.

Shu Yuhui continued: "We will get [at least] one, but two [signings from Europe] is also possible.

"Buying a world-class centre forward is a no-brainer, but a winger is in our plan too. The dust has not settled yet, but we are close to reaching a deal [with the winger]."

Tianjin Quanjian have struggled for consistency since earning promotion to the CSL, winning just two of their opening nine matches to sit 10th in the 16-team league – 12 points adrift of leaders and defending champions Guangzhou Evergrande Taobao.