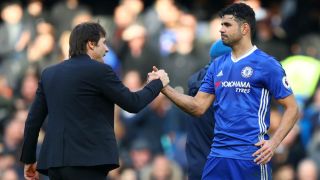 Diego Costa regrets initially leaving Atletico Madrid for Chelsea but feels everything has fallen back into place after an acrimonious parting of ways with former coach Antonio Conte.

The Spain international joined Chelsea after scoring 27 times for Atletico in the 2013-14 LaLiga campaign, encouraging the Premier League side to part with a reported £35million (€40m).

Costa was a success in England, scoring 52 times in the top flight across his three seasons at Stamford Bridge, but his final year was mired by reports of a rocky relationship with Conte.

The Italian was understood to have fallen out with Costa in January 2017 when the striker was linked with a move to the Chinese Super League.

Although they appeared to bury the hatchet and Costa went on to score 20 times as Chelsea won the Premier League title, Conte allegedly told the striker via text message in June he was not in his plans for the following season.

is our January Player of the Month: “To play again for this shirt and team, I really wanted that.” February 8, 2018

"It was a very bad moment, but it wasn't my fault. People said things, but time puts everything in its place; look where the coach is, look at Conte," Costa said to Marca, referencing Conte's sacking in July.

"I was wrong going to Chelsea, because of their way of dealing with things. Cholo [Atletico coach Diego Simeone] is a direct coach, and when he doesn't love you, it's clear and he shows it.

"At Chelsea it was the opposite. I had the option of returning to Atleti and when Chelsea told me to go back to training with the reserves, I was clear that I was going back to Atletico, even though there were other offers.

Costa returned to Atletico despite not being able to play for four months due to being signed outside the transfer window and the club's ban on registering new players.

But the chance to work with Simeone again was worth it.

"Cholo has always been important, because of the coach and the person he is," Costa said. "I love him as a person.

"He's always been very direct to deal with. When he told me he wanted me to come back, it was like I'd never left.

"Here I have everything; a very big club in a big city and people are more similar to Brazil. Cholo is the boss and I was excited. I was happy to return."