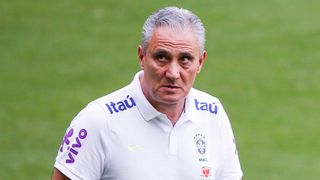 Brazil head coach Tite believes Argentina must be having trouble sleeping as they face the possibility of missing the World Cup for the first time since 1970.

Lionel Messi's Argentina are outside the CONMEBOL qualifying places and in danger of failing to book a spot at Russia 2018 heading into Tuesday's do-or-die clash against Ecuador at altitude in Quito.

The two-time world champions, runners-up three years ago, have been a mainstay in the showpiece tournament since missing the 1970 edition in Mexico, but three consecutive draws have left Argentina adrift of the play-off spot on goals scored.

South American leaders Brazil, meanwhile, are already assured of a berth at next year's World Cup and there are suggestions the Selecao – with nothing to play for against hopefuls Chile in Sao Paulo – could deliberately harm Argentina's chances, but Tite insisted that is not the case.

"I want the competition to be fair," Tite told reporters on Monday. "That will make us all play well.

"I have friends in Argentina. I respect Jose Pekerman very much in Colombia and I recognise the capacity of Chile."

Jorge Sampaoli's Argentina (25 points) are sixth following last week's goalless draw with Peru, but a win over Ecuador would see them rise above Colombia (26) or Peru (25), who are due to meet in Lima.

"Qualification for the World Cup is not about one game, it is about a full campaign", added Tite, who is open to continuing in his role beyond the World Cup.

"Yesterday [Sunday], we thanked each other because we are already qualified.

"I can't imagine what it is like for others; they must be having trouble sleeping. We are going to do what is most important for us, for the dignity of a people. [In the end], others will reap what their work sowed."