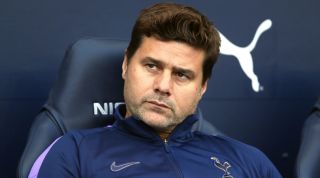 Pochettino has overseen a period of great change at Tottenham in recent years, including a move to a new, state-of-the-art stadium.

Last season, he made history by taking Spurs to a Champions League final - where they lost to one of the greatest Liverpool sides in decades.

However, a poor start to the season has seen Spurs pick up only three wins in 11 games.

They suffered one of the worst home defeats on record in European competition when they lost 7-2 to Bayern Munich.

And now speculation is rife in media that Pochettino won't last the season and may go in search of pastures new.

But former Spurs manager Harry Redknapp has backed him to turn things around in north London.

"Where does he go better than Tottenham? Liverpool don't want him, they've got Jurgen Klopp. Pep (Guardiola) is at Manchester City, they don't want him."

While remaining adamant that Pochettino can't find a better club in England, Redknapp conceded that Real Madrid could lure him away.

"OK, if Real Madrid comes up he may fancy going to Spain, obviously being from Argentina. The language wouldn't be a problem and living in Madrid would be very nice.

"Managing a club like Real Madrid, if that came up I'm sure it would be a difficult one for him to turn down."

The Argentine has long been linked with the hot seat at Manchester United, and it could become available soon with Ole Gunnar Solskjaer under pressure.

All considered, however, Redknapp believes Pochettino would be mad to leave Spurs for United.

"But other than that, I don't see where he goes. Manchester United? Maybe but Pochettino is not silly, he knows he's got a massive rebuilding job there."

Redknapp guided Spurs to Champions League football for the first time and says some players have to do better.

The likes of Christian Eriksen, Jan Vertonghen and Toby Alderweirled are all in the final year of their contracts.

Redknapp believes some of them are playing like their heads have been turned.

"The problem they've got is that those players who wanted a move are maybe not playing particularly well," he said.

"Eriksen's form has not been what it was. I think he's a great player. There are a few of them who haven't been playing so well.

"The two centre-halves as well (Vertonghen and Alderweireld) - the two Belgian boys - they have to start performing."

Forget the defence for a minute: England's midfield is the real concern right now