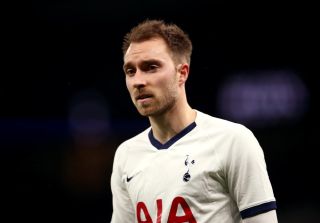 The 27-year-old, who was out of contract in the summer, has signed for the Serie A side for a fee in the region of £17million.

Eriksen ends a glittering six-and-a-half-year stay in north London, where he was a driving force behind Spurs’ ascent towards to the top of the English game.

As Eriksen’s departure was announced, Spurs revealed they had taken the option to make Giovani Lo Celso’s loan move from Real Betis permanent.

We can confirm the departure of Christian Eriksen who has today completed a transfer to Inter Milan.— Tottenham Hotspur (@SpursOfficial) January 28, 2020

The Argentinian, seen as a natural replacement for Eriksen, has joined for £27.2million on a deal until 2025.

A Spurs statement read: “We are delighted to announce that we have exercised the option to convert the loan of Giovani Lo Celso from Real Betis Balompie to a permanent transfer.

“Gio has signed a contract with the club until 2025.

“The midfielder has produced impressive performances after establishing himself in the team following a hip injury which restricted his playing time in the early part of his loan at the club.”

Spurs would have had to pay £34million to make Lo Celso’s deal permanent in the summer, which was obligatory if they reach the top four.

After a slow start to life in north London, the 23-year-old has shown glimpses of his potential in recent weeks.

We are delighted to announce that we have exercised the option to convert the loan of @LoCelsoGiovani from Real Betis to a permanent transfer.— Tottenham Hotspur (@SpursOfficial) January 28, 2020

On Saturday, following his role in Spurs’ 1-1 FA Cup draw at Southampton, boss Jose Mourinho said his form had given Spurs “no choice but to execute the option”.

There was less fanfare around the departure of Eriksen, who leaves having scored 69 goals and provided 89 assists in 305 appearances.

“The club can also confirm the departure of Christian Eriksen after agreement was reached with FC Internazionale Milano for the Denmark international’s transfer,” they added.

“We wish Christian well for the future.”