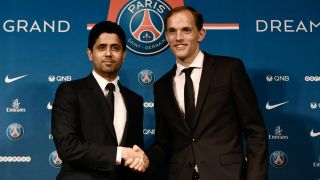 The Ligue 1 champions led their pre-season clash in Austria with an early strike from Timothy Weah, but three goals in the second half eased the German heavyweights to victory.

PSG fielded a fairly inexperienced team with many players still on their summer holidays, and whilst he can look forward to other squad members joining up with the team in Singapore, he is keen to get his stars back with the domestic season starting on August 11.

"We have an extraordinary offence with Neymar, Cavani and Mbappe, so I'm looking forward to working with these players," he told reporters.

"Unfortunately, we will have to wait a bit longer, because they were all very long at the World Cup. They will be late and the league starts early. Of course, a coach is not happy about that."

Tuchel, 44, was managing in his first competitive match with PSG after a 4-2 friendly defeat to Chambly behind closed doors last weekend, but said he saw plenty of positives from his young side.

"I did not know what to expect, because in our team there were so many inexperienced players," he said.

"I saw a humble team with a big heart and fighting spirit. We knew what kind of quality was on the other side. We started very well. We deserved to lead and had chances to lead two or three-nil.

"After we took out Gigi Buffon and our three main players it was really tough."

The former Borussia Dortmund manager added that he was delighted PSG was able to sign former Juventus goalkeeper Gianluigi Buffon, and that the 176-time Italy goalkeeper will provide great experience to the squad.

"I only knew him from interviews wearing a Juve jersey. And suddenly he stands next to you at breakfast and says, 'Buongiorno, Mister,'" he said.

"He is not only legendary on the pitch, but also as a human. He comes to the training every day with a smile. He constantly coaches the young goalkeepers. For me as a coach, it's great to have someone like him in the team."