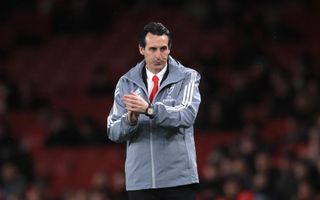 The Gunners remain without a victory from their last seven matches as Pierre-Emerick Aubameyang saw his first-half goal cancelled out as the visitors left the Emirates Stadium with a 2-1 victory.

Here, the PA news agency takes a closer look at how Emery fared on another galling night for the beleaguered Spaniard.

Recalling Granit Xhaka was a big decision taken by Emery, the 27-year-old having not featured since being stripped of the captaincy for swearing at supporters.

Eyebrows were raised when it emerged David Luiz would be his midfield partner as Emery tweaked his tactics.

The Brazilian had not played in the role regularly for over two years but any chance of the test proving to be a masterstroke from Emery ended when Luiz was forced off with a chest injury with a little over half-an-hour on the clock.

Other than that, Emery named a fairly strong side as the likes of Sokratis Papastathopoulos, Kieran Tierney and Aubameyang all started.

It was not an evening to judge Emery’s current standing amongst the fan base given so many supporters steered clear of the Emirates Stadium.

Officially, 49,419 tickets were sold but in truth it was the lowest attendance in the history of a stadium that opened in 2006.

Even with such a sparse crowd, anti-Emery songs were heard in smatterings ahead of kick-off and only intensified as the hosts shipped two goals in nine second-half minutes.

“Emery Out. No tactics, no formation, nowhere to hide,” read a number of printed posters as some fans headed for the exits early.

Emery often prowls the confines of his technical area – and beyond – for much of the 90 minutes and it was no different here.

He was instructed by referee Ruddy Buquet to change his jacket as it clashed with the Eintract Frankfurt kit, swapping black for a replacement grey number.

The 48-year-old grimaced as Daichi Kamada’s second of the night saw Frankfurt take the lead and disappeared down the tunnel at the full-time whistle.