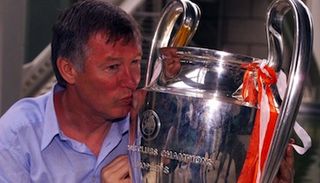 This theory will now be tested after 71-year-old Ferguson, the combative Scotsman who has become the most successful manager in the history of English football, said he was retiring this month after 26 years in charge of the team.

United shares fell 3.5 per cent to $18.10 in early trade in New York, having climbed in recent months from last August's $14 launch price.

"Manchester United has been transformed as a football club under the management of Sir Alex Ferguson," said Dan Jones, a partner in the Sports Business Group at Deloitte.

"Financially, the last 26 years have coincided with a wider revolution in English football with massive investment in the game and the growth of the Premier League, particularly driven by domestic and international broadcast deals," he added.

United, controlled by the American Glazer family, gave no word on who will step into Ferguson's shoes. David Moyes, a quietly spoken yet forceful Scotsman who has turned Everton into a Premier League force on limited resources, was the leading contender, according to bookmakers.

The charismatic Portuguese Jose Mourinho, who had been tipped to return to the Premier League with Chelsea from his post at Real Madrid, is another candidate.

United will want to avoid a replay of the early 1970s when the departure of manager Matt Busby, who took the team to their first European Cup triumph in 1968, was followed by a decline and brief relegation to the second tier.

Ferguson will retire on a high after leading the club to a record 20th English league title, the 13th time they have been champions since the Premier League was formed in 1992.

Under Ferguson, United have grown into a global brand that claims to have more than 650 million followers around the world.

Players such as David Beckham and Cristiano Ronaldo have come and gone but Ferguson has been a constant presence on the touchline at Old Trafford for more than a quarter of a century, urging on his players and raging at perceived injustices.

With Chief Executive David Gill also stepping down this summer, it's suddenly all change at the club. Executive vice-chairman Ed Woodward will take over many of Gill's duties and work with the new manager on player signings.

United already have long term sponsorship agreements in place with companies such as General Motors and insurer Aon.

The club is in the process of discussing a new agreement with long-term kit supplier Nike to replace a deal worth upwards of £25 million per season.

"We believe that Manchester United is a first class institution with a 135-year history of excellence that has wisely been planning and preparing for the eventual retirement of Sir Alex Ferguson," stock market analyst Randal J. Konik of Jefferies said in a note.

Although the club's financial future is sound, the new manager will face pressure to deliver trophies rapidly.

Having made his mark managing Scottish team Aberdeen, Ferguson struggled to make an impact after joining United in 1986. He did not win a major trophy there until they lifted the FA Cup in 1990, but after that the floodgates opened.

United had always enjoyed a big following across Britain, capturing the hearts of many neutrals as Busby rebuilt the club after the 1958 Munich air disaster in which eight players died.

United's growth as a business since the 1990s has coincided with a huge surge in interest in the Premier League at home and abroad. English football got itself luc