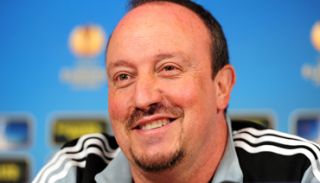 Chelsea host FC Basel on Thursday holding a 2-1 lead from their semi-final first leg and Benitez is two matches away from claiming a European crown for a club he will leave at the end of the season.

APP:Europa League stats at your fingertips with Stats Zone, and it's completely FREE

European success proved elusive for Mourinho despite the glittering array of domestic silverware he won during his three-year stint at Chelsea that ended in 2007.

Even if he does succeed in Amsterdam later this month, the Chelsea fans who so vocally objected to Benitez being hired to replace the Champions League-winning coach Roberto Di Matteo, are unlikely to be chanting his name.

Real Madrid's aggregate defeat by Borussia Dortmund in the Champions League semi-finals on Tuesday increased the likelihood that Mourinho will not be at the Bernabeau next season.

Benitez, who has been suggested as a possible replacement for Mourinho at Real, refused to enter the debate in his pre-match news conference on Wednesday.

"It's not my business," he said. "I have to concentrate on my business, that is to beat Basel on Thursday night."

Chelsea are favourites to finish the job after victory in Switzerland last week but Benitez, who is juggling his squad in a bid to guarantee a top-four finish in the Premier League, said Basel still posed a significant threat.

"We have an opportunity but my concern is that we will be thinking we are in the final. It's not the case," Benitez, who won the Champions League for Liverpool in 2005 and the UEFA Cup with Valencia the year before, told reporters.

"We play against a very good team that has scored goals away, so everybody has to realise it will be difficult.

"Hopefully I will be wrong and we can score a lot, but first we have to win and afterwards we can think about the final."

Basel knocked out Tottenham Hotspur in the quarter-finals on penalties after both legs ended 2-2, and the Swiss champions are desperate to become the Alpine country's first club side to reach a European final.

"I think they will come trying to score. They did it against Tottenham. I am sure they will be offensive and push. We saw that in the second half and I think it will be the same approach. It's the only way for them to qualify," Benitez said.

"But I have a lot of confidence in my players."

Chelsea will be without suspended left-back Ashley Cole on Thursday while David Luiz, who scored the last-minute winner in Basel, Ramires and John Obi Mikel are one yellow card away from missing the final.