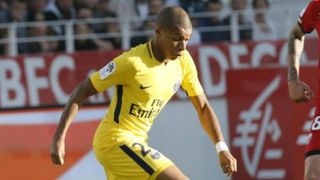 Barcelona could not have signed teenage forward Kylian Mbappe in the off-season, according to head coach Ernesto Valverde.

Mbappe, 18, was linked to numerous clubs before joining Paris Saint-Germain on loan from Monaco, although that move is expected to become permanent.

The France international's agent said Mbappe wanted to sign for Barca when he learned Neymar was heading to PSG.

Valverde, who took over at Barca in May, said there was no chance for the LaLiga giants to sign the forward.

"I don't know what to say to you. There's always talk about a lot of players," he told a news conference on Friday.

"To my knowledge, we couldn't have signed him. But I don't know, no idea. I guess not, because he's not here."

Barca were linked to several players after Neymar's departure, with Ousmane Dembele their biggest arrival for a reported €105million from Borussia Dortmund.

Valverde said he was unfazed about the transfer market, insisting his focus was on getting the most out of his current squad.

"I think that Barcelona are always conscious of improving the team, if they can," he said.

"But at the same time, as a club, and in my case as coach, I am here with the idea of getting the best out of the players I have. So I am not keeping an eye on other players.

"Obviously you always are aware of the market, but my idea is to work with the players that are already here, because they are the ones who have to push Barcelona.

"But we will see, as you said, there's still two months until January, and there is enough time."

The LaLiga leaders host Malaga in their next outing on Saturday.