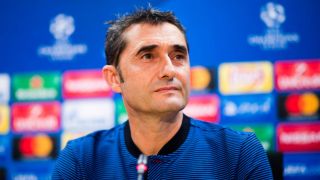 Barcelona coach Ernesto Valverde will put personal feelings to one side on Wednesday as he plots the downfall of former employees Olympiacos in the Champions League.

Valverde enjoyed two successful spells in charge of the Greek club, sandwiched in between a brief stint with Villarreal, winning the Greek title three times and also adding the cup in two of his three seasons at the helm.

Now with Barcelona, the group draw has provided the experienced Spaniard with the chance to go head-to-head against a club that is still close to his heart.

"It's an emotional game for me, as it will be when we play there. It's a magical stadium where they play, and I had a lot of fun there," Valverde told the media.

"They've changed team a lot since then, but their style hasn't changed. They are accustomed to winning, and that's what I like.

"They have won titles and I still know a lot of people there. They showed me a lot of love – and the feeling is mutual. I said when I left that a part of me was staying there.

"Unfortunately, we are playing against each other now, but I hope they enjoy the two games. It will be emotional for me."

However, there will be no sentiment shown at Camp Nou, with the hosts eager to make it three wins from three in Group D ahead of the return fixture in Greece on October 31.

Valverde: "For me, it's an emotional game. I am still close to a lot of people who are involved with Olympiacos" October 17, 2017

In contrast, Olympiacos are yet to pick up a point after defeats against Sporting Lisbon and Juventus, although Valverde is taking nothing for granted.

"They need to win. They have a lot of hopes for this competition but have lost their first two games," he said.

"They might be able to surprise us on the counter-attack. They have fast, quick players and this is what they live for – to enjoy these type of moments. I think it's going to be a difficult match."

Barcelona go into the game off the back of a 1-1 draw with Atletico Madrid and while Valverde admits his players were fatigued after their exertions at the Wanda Metropolitano, he will still pick the strongest available XI on Wednesday.

"It's an important match, but we also have to face Malaga after that, so I will put out the best players I can for this game," he added.

"It's true – the other day, the players said after the game [against Atletico] that they were a little tired. They'd come off a couple of tough weeks. But they've now had four days without a game.

"We are thinking about the three points that give us a good cushion. But we are also trying to pay attention to the importance of the game. We know they haven't won. We are clear that tomorrow's match is very important."