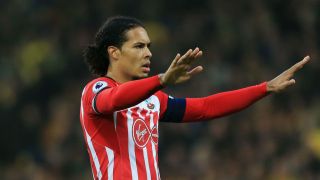 Virgil van Dijk is training separately from Southampton's first team and the defender is unavailable to play in pre-season games as he wants to leave the club, according to boss Mauricio Pellegrino.

The centre-back is a reported target for Manchester City and Chelsea, while Liverpool were forced to apologise "for any misunderstanding" after suggestions there had been an alleged illegal approach for the 25-year-old.

Van Dijk missed the end of last season through injury and he could yet become the latest Southampton player to join Liverpool, following Adam Lallana, Sadio Mane and Dejan Lovren to Anfield.

Pellegrino confirmed Van Dijk has made it clear he plans to leave Southampton, but he still hopes the Netherlands international can be persuaded to stay.

"My relationship with Virgil is excellent," Pellegrino told reporters. "I was clear with the boy, and I was talking from the first day with him. The club was clear. The club told me they will not sell Virgil.

"The boy said that he is not available to play because he wants to leave. This is the decision. I had to say, 'If you don't want to be involved because you don't feel okay then you have to train alone until this period of time is over'.

"I hope that Virgil can review his feelings because you know that today a player is big business. Not just the player but behind them is a lot of interests.