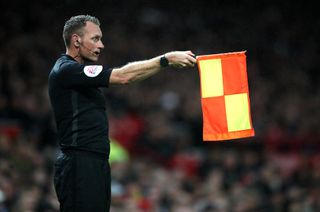 VAR was the big winner at Old Trafford after Manchester United and Arsenal had to settle for a 1-1 draw in the Premier League.

Scott McTominay fired the hosts ahead with a stunning strike on the stroke of half-time, but Ole Gunnar Solskjaer could only watch on in horror as Pierre-Emerick Aubameyang’s 58th-minute effort was eventually given.

Initially the linesman flagged for offside, but the Arsenal striker played to the whistle and found the net for his eighth goal of the campaign.

Now that is exactly what VAR is for: the absolute howler.— Gary Lineker (@GaryLineker) September 30, 2019

Referee Kevin Friend went to VAR and, after a slight delay, Aubameyang was shown to be at least a couple of yards offside when Bukayo Saka found his team-mate.

Sky Sports pundits Jamie Carragher and Roy Keane were both in agreement VAR was used at its best for Arsenal’s goal at Old Trafford.

“You play until the whistle,” former United captain Keane insisted. “You would be critical of the United back four because every player is in the wrong position, but give Arsenal credit, it’s a lovely finish.”

Carragher said: “VAR has been a massive debate all season, it has split the footballing world, but that was VAR at its best.”

Michael Owen tweeted: “That’s why we have VAR. Imagine if that had been given offside. He was miles on – right in front of the linesman.”

“Now that is exactly what VAR is for: the absolute howler,” tweeted Gary Lineker.

That’s why we have VAR. Imagine if that had been given offside. He was miles on – right in front of the linesman.— michael owen (@themichaelowen) September 30, 2019

The intervention of VAR means it is now two wins in 12 Premier League games for Solskjaer, but Keane backed his former team-mate.

He concluded: “They have given Ole the job so support him and let him get on with it. They need to support him in the transfer window.

“Are there more tough days ahead? You bet, but they have young players who are learning, they will get some players back soon and you need more from Paul Pogba.”