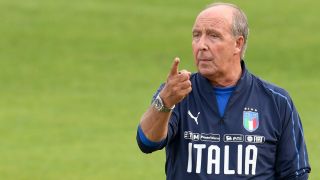 Giorgio Chiellini's first-half goal was cancelled out by Aleksandar Trajkovski with 13 minutes remaining to ensure a miserable end to an insipid performance from Italy.

They travel to Albania on Monday for their final fixture on the brink of securing a play-off berth and Ventura is eager to inject some new faces into his listless side.

"We lost some players and lost a certain thread that we had in the first half, in my view," he told Rai Sport.

"I thought the first half was positive, the second was not, but when you have nothing left in the tank, that's what you get.

"I think a lack of fitness levels made a big difference and when that drops, the sharpness goes, so we could not develop anything more. In football, when you don't propose anything in attack for an entire half, it can well be that you concede.

"We hope that in the meantime four or five of the players we're missing can return. We need to get the players back, play some real football and get the situation back on track."

Meanwhile, goalkeeper Gianluigi Buffon – who made his 172nd international appearance in the draw – believes the poor performance was partly due to a hangover from last month's comprehensive 3-0 loss against Spain.

He said: "The defeat to Spain damaged our confidence, as we probably thought we were at a superior level to what we really were.

"We are still carrying the after-effects of that match. If we had won 1-0 tonight, I don't think it would've changed anything in terms of performance as a team, as individuals, in the fluidity of our play.

"The draw only exacerbated the need to emerge from this difficult moment. Some of us, including myself, must take the responsibility and help the others to be part of a group that has enthusiasm, ideas and wants to go to the World Cup."