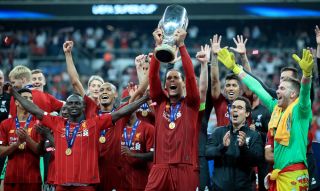 Virgil Van Dijk is hoping to come out on top again at The Best FIFA Football Awards ceremony in Milan on Monday.

The Liverpool defender pipped Lionel Messi and Cristiano Ronaldo to the UEFA player of the year award last month and could do so again when FIFA announces its 2019 winners at the Teatro alla Scala.

Champions League winner Van Dijk was nominated on a three-man shortlist earlier this month alongside Messi and Ronaldo for The Best FIFA Men’s Player Award.

Some of the Premier League’s biggest names dominate other categories, with Liverpool’s Alisson Becker and Manchester City’s Ederson shortlisted for the goalkeeper accolade, along with Barcelona’s Marc-Andre Ter Stegen.

England Women manager Phil Neville is in the final three for The Best FIFA Women’s Coach, having guided the Lionesses to the World Cup semi-finals in July.

The winners of three other categories, women’s goalkeeper, the FIFA Fan Award and the FIFA Puskas Award – for the best goal – will also be announced on Monday.