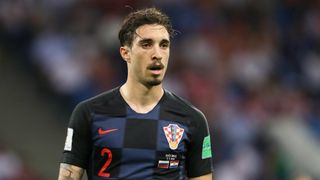 Sime Vrsaljko hopes he can recover from a knee injury in time to face England in the World Cup semi-final.

The Croatia right-back was substituted during extra time against Russia in the quarter-finals, with Zlatko Dalic's side going on to prevail in a penalty shoot-out.

But Atletico Madrid defender Vrsaljko hopes to be passed fit for Wednesday's clash in Moscow.

"We don't really have much time to rest, after two 120 minutes battles, we are physically and emotionally tired," Vrsaljko told HNTV. "Of course, we'll do our best to be fit for the semi-final.

"During extra time against Russia I felt knee pain. I felt something strange and, after discussion with doctors, we decided I should go off. It is not that bad, but it bothers me."

Should Vrsaljko miss out, Vedran Corluka is expected to come into the back four, while Domagoj Vida is available after FIFA warned the centre-back over his conduct following a social media video.

Goalkeeper Danijel Subasic says he will play through the pain against England after he needed treatment on a muscle problem against Russia before becoming Croatia's spot-kick hero for the second round running.

Croatia are in the last four of the World Cup for the first time since 1998 and Vrsaljko says his team's run cannot be compared to the Europa League success he enjoyed with Atletico Madrid last term.

"It is easy to say this team has [the same] potential as the one from 1998, but it is not easy to put together so many men, create an atmosphere, even provoke luck," Vrsaljko added. "There were so many big-quality teams and they are home by now.

"You can't even compare club success with this, no way. Winning the Europa League was big for Atletico, we were so lucky, but playing for the national team, for your country, is totally different.

"You don't just put on your jersey and play, because you carry big responsibility playing for your parents, your family, friends, for your nation."