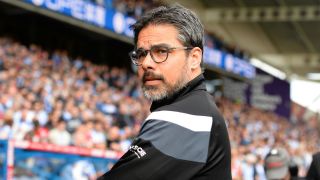 Assistants Christoph Buhler and Andrew Hughes have also extended their deals, which were due to expire next year, until 2021.

"I'm very happy that we can announce David, Christoph and Andrew's new contracts today on the back of a superb debut Premier League season," Huddersfield chairman Dean Hoyle told the club's official website.

"We have a fantastic working relationship and we're looking forward to taking on the challenge of establishing Huddersfield Town in the Premier League together."

Wagner took Huddersfield into the Premier League for the first time with a penalty shoot-out victory in the 2016-17 Championship play-off final over Reading.

The German guided his side to a 16th-place finish in 2017-18, with their survival in the top flight confirmed with a 1-1 draw away to Chelsea.

Wagner had been linked with a possible move away from the club but he insists he had no doubts about extending his contract.

"The decision to extend my stay at this club was not a difficult one," he said. "The relationship Christoph, Andy and I have with Dean, the rest of the board, the staff and the supporters is special.

"We've achieved some incredible things together in two and a half years and now I'm excited about the future.

"We still have a lot of work to do as we adapt to life in the Premier League, but this club and its people have the ambition, desire and attitude to take this challenge on.

"Finally, a message to Huddersfield Town fans everywhere. Thank you for the support you have shown us and the players since I joined the club; it's been such a big factor in the success we've enjoyed."