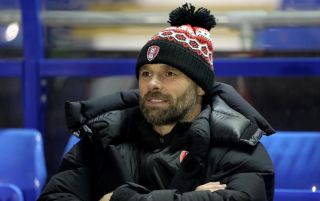 Rotherham boss Paul Warne has joked that Jurgen Klopp might have issues with the wage structure if he was to take over at the League One club.

Sky Sports pundit Paul Merson said this week that the Liverpool manager is so good he could get the Millers promoted to the Premier League.

Merson said: “I’m a great lover of Jurgen Klopp. I could use any team here, but I’m just going to say Rotherham… I think Klopp could go to Rotherham and take them to the Premier League in time. He’s that good.”

The South Yorkshire club have never been higher than the second-tier and were last season relegated from the Championship where their highest-paid player was on £5,500 per week.

Warne took the comments in good spirit, but hinted the conditions might not be exactly the same as at Anfield.

“I think the German coaching badges are a lot better than the English ones!” he told the PA news agency when asked why he had not taken the club to the Premier League.

“He is a lot more experienced than me. I can understand Paul Merson’s comments because Klopp at the moment is head and shoulders above.

“But if he got us to the Premier League, wow. I hope my chairman hasn’t read that.

“I am not sure he could bring (Sadio) Mane and (Roberto) Firmino here, though, I don’t think the wage structure will work.”

Warne, who has been in charge at the New York Stadium since December 2016, has guided his side to the top of League One this season and they are on course to bounce straight back.

But how might the 46-year-old get on if he was in charge at Anfield?

“I reckon I might be able to win the Premier League with Liverpool this year. If I took over now I would give myself a good chance.

“I don’t want a job swap because I don’t want to commute, that is too far for me, so if he did want to take the job…”