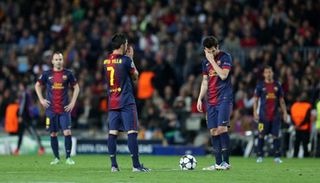 The leaders host Real Betis on Sunday having been swept out of their semi-final 7-0 on aggregate by a far superior Bayern Munich on Wednesday.

A victory for Barca and a defeat for Real would be enough to secure Tito Vilanova the league trophy in his debut season at the Nou Camp helm.

"We are very deflated but there is still a La Liga title to secure," Barca midfielder Cesc Fabregas told reporters after the Bayern game.

Defender Gerard Pique added: "We need to sort it out as quickly as possible.

"We haven't known how to compete effectively in the King's Cup or the Champions League but we have been very consistent in the league."

Central to wrapping up the trophy will be getting top scorer Lionel Messi back to full fitness from his hamstring problem after he surprisingly sat out Wednesday's 3-0 home defeat.

Vilanova said the World Player of the Year was not injured but felt a "strange sensation" before the Bayern game, and decided it was best to start with him on the bench.

Once Arjen Robben had put the Germans ahead in the second half, Vilanova quickly gave up on any chance of a fightback, decided against committing Messi and withdrawing his two leading playmakers Xavi and Andres Iniesta.

Barca have appeared lethargic in recent games, lacking in sharpness, and a number of players have spoken of feeling stretched to the limit during the season run-in.

They have managed only three wins from their last nine games in all competitions and may be forced to wait a little longer before they can start to turn their focus on next season.

Betis, seventh in the standings and chasing a place in Europe next season, have one of the best away records in La Liga although like Barca they have started to run out of steam and have one win from their last six outings.

Real's Champions League semi-final exit to Borussia Dortmund on Tuesday was not as traumatic as Barca's, as they at least salvaged some pride by almost completing a comeback at the Bernabeu.

Real have not lost a home game since January 2012 while Valladolid have all but secured their top-flight status for another year. They lie 13th with 40 points.

At the foot of La Liga, the bottom six are separated by five points as the spectre of relegation looms large.