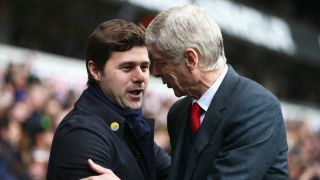 Pochettino was angered by a remark made by the Gunners boss before the second leg of their EFL Cup semi-final with Chelsea on Wednesday.

Wenger had claimed his side were not given enough credit for their performances in recent seasons, accusing pundits of celebrating "some teams who have not been in a final for 25 years" – a comment that was taken by some as a swipe at Spurs and Liverpool.

But the Frenchman is adamant he was speaking generally rather than about a specific team and is disappointed at the way the statement was interpreted.

"I just complained that we are always in the hot spot. I don't speak about anybody," he told a news conference.

"That's why I'm not happy about that because I didn't speak about Tottenham at all. I didn't even think about that.

"It was just a general example. I've worked here for 20 years and I respect the press and stand up for what I say but I do not answer for things I haven't said.

"Of course he [Pochettino] has been misled. He said I have to focus on Arsenal. He's right, that's what I do.

"I have no problem with him or anybody else. I want to be responsible for what I say but not what I was supposed to think or say. That's really disappointing for me."

Wenger also responded to an apparent dig at Arsenal by Manchester United boss Jose Mourinho in the wake of Alexis Sanchez's move to Old Trafford this week.

Mourinho said the Chile international had left "a fantastic club to join a giant club", but Wenger would not say if he considered the comment to be insulting.

"I don't know. You should ask him," he said. "Can you be fantastic and not giant, yes; can you be giant without being fantastic, yes.

"You should ask him what he means by that. I think the two clubs have made a good deal."