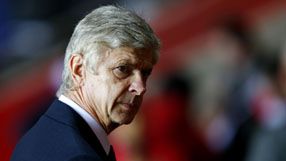 It is a puzzle that manager Arsene Wenger is struggling to solve and, while he was pleased with a 2-2 draw from two goals down, the result did little to enhance Arsenal's prospects of climbing into the top four and preserving their long run of Champions League qualification.

Asked why his side have become such slow starters, Wenger was at a loss to offer a theory, although he said nerves were infecting his defenders.

"There is not always a rational explanation," Wenger told reporters. "Sometimes you have wait until the other teams drop a little bit to get complete domination of the game.

"If you look at us against Manchester City we had a lot of the ball even with 10 men. Sometimes you think it is not bad for us to go into half-time at 0-0."

Arsenal conceded an early goal before thumping West Ham 5-1 in their previous game, conceded twice in the opening 16 minutes in a 2-1 defeat by Chelsea and twice before half-time in a 2-0 defeat against Manchester City.

It has become a theme for the Gunners and Wenger said the early jitters were costing his side dear.

"I believe that recent history has an impact on the way we started the game tonight," he said.

"We have to get that out of our minds and just focus on what we do well - playing football.

A comical stumble by Bacary Sagna led to a bout of penalty area pinball that allowed Luis Suarez to put Liverpool ahead early on and the visitors had numerous chancse to extend their lead before Jordan Henderson was allowed to pick his was through to make it 2-0 on the hour.

Arsenal then caught fire with Olivier Giroud's header and Theo Walcott's sizzler levelling it up in two minutes.

Giroud somehow failed to connect with a low cross late on as Arsenal remained four points behind fourth-placed Tottenham in the battle for Champions League places.

"We didn't give out big security tonight defensively but on the other hand, when you see what the spirit is in the team, and what the quality is going forward, you smell that something can always happen at any moment," Wenger said.

Liverpool manager Brendan Rodgers said he was proud of his team after they bounced back from FA Cup humiliation at third tier Oldham Athletic on Sunday.

"I never had any second thoughts about us getting a reaction," Rodgers said.

"It's a game we should have won - we didn't but we showed great resilience and quality and had other chances to get other goals. I'm very proud of the team."