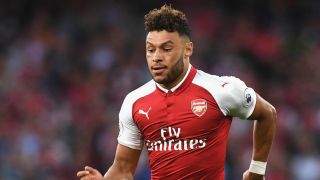 Arsenal manager Arsene Wenger urged Alex Oxlade-Chamberlain to commit to the club as reports linking him with a move to Chelsea intensify.

The Premier League champions have reportedly made a bid for the England international, who has under a year left on his contract at the Emirates Stadium.

Wenger would not be drawn on speculation Oxlade-Chamberlain has told him he will not be renewing his deal ahead of a meeting between the pair and chief executive Ivan Gazidis.

But the Frenchman remained hopeful of retaining the 24-year-old, who Wenger insists is vital to his future plans.

"I want Alex to stay at the club and be one of the big players of the future of the club, he's one of the players the team has to be built around in future," Wenger said ahead of Sunday's trip to Liverpool.

"I want him to commit to the club and be one of the carriers of this team.

"I know of every bid we have, of course, but I think it's best to focus on Sunday's game.

"We invested a lot of time and money and confidence in players like Chamberlain and for me he has a responsibility to the club.

"I want to keep my best players – my only target is to keep everyone on board. I hope he commits."

Wenger also commented on the future Jack Wilshere – another player whose contract is expiring – who was sent off for Arsenal's Under-23 side for grabbing an opponent on the neck this week.

"He should not have responded, but I can understand a lot when you have gone through what he has gone through with bad tackles – it was a human reaction," added the 67-year-old, whose side were beaten 1-0 at Stoke City last time out.

"He is working very hard to come back, another setback for him would be terrible.

"You know how much I love Jack and his talent. I started him at the age of 17, but in today's football world you need a consistent presence at the top.

"I hope he can manage to do that. Nobody questions his quality, talent or determination."