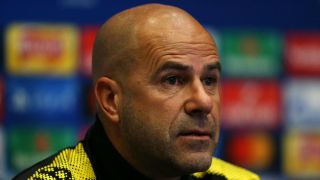 Peter Bosz has called on his Borussia Dortmund players to be brave and attack Wednesday's Champions League opener at Tottenham.

The two sides are meeting in Group H at Wembley, with Dortmund returning to the scene of their 2013 final defeat to Bayern Munich.

Former Ajax boss Bosz, appointed at the beginning of this season, is determined to be positive and has already noted improvement in the squad.

"The first game is always important," he told a pre-match news conference. "We're approaching the game like any other and we're here to win.

"At the start we made defensive mistakes, but since then the players have really been putting everything into practising well.

"Spurs have a similar philosophy to us. I'm expecting a good game. I want us to be brave."

Having lost in qualifying with Ajax last year, Bosz is making his coaching bow in Europe's premier competition and he is excited by the prospect.

"The Champions League is the highest level you can play at in Europe - that's got to be good fun," he said.

Nuri Sahin was part of the Dortmund team beaten by Bayern, but he is similarly looking forward to the game at Wembley.

He added: "Of course the final we played here at Wembley is still a painful memory, but excitement is the overriding emotion."