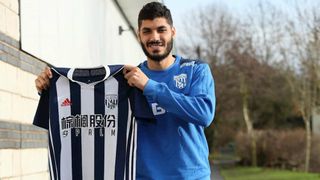 West Brom have announced the signing of Ali Gabr from Zamalek, the defender joining Egypt team-mate Ahmed Hegazi at the club.

Gabr has signed a loan deal to the end of the season, but West Brom – as they did with Al Ahly for Hegazi – have agreed a future fee with Zamalek for the centre-back.

West Brom technical director Nick Hammond confirmed Gabr and Hegazi were scouted at the same time, having impressed for Egypt at the African Cup of Nations.

"Of course this is a great opportunity to come to the Premier League – the best league in the world," said Gabr. "It's something I couldn't say no to.

"I'm very happy and excited to be here. I'm really looking forward to getting started with the players and the team. I'm here to help the team and to do my job. Whatever the team's targets are, I'm going to help them achieve it.

"I feel very comfortable playing alongside him because of our experience together with the national team."

So you've hit followers on then,  Almost as impressive as your performances this season... January 29, 2018

Although the Northern Ireland international sustained a hamstring injury in Saturday's FA Cup win at Liverpool, clubs including Manchester United, Arsenal and Manchester City have been linked with the 30-year-old.