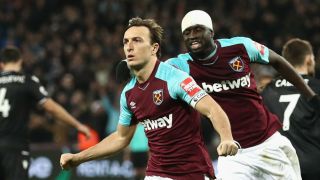 Mark Noble scored his 50th goal for West Ham to earn David Moyes' side a 1-1 draw with Crystal Palace that edged the Hammers into the top half of the Premier League table.

Captain Noble levelled the match with a well-taken taken penalty late in the first half after Christian Benteke had put Palace ahead in a scrappy but entertaining London derby.

All eyes at London Stadium were on Joao Mario as the Inter loanee made his Premier League debut and he showed flashes of the kind of composed creative play that Javier Hernandez thrives upon.

Indeed, the two men combined in the build-up to Hernandez winning the penalty and Portugal international Joao Mario seemed to grow in confidence as West Ham sought a decisive second goal.

But Roy Hodgson's Palace, who lost 4-1 to Arsenal in their last Premier League outing, defended resolutely and aside from an injury to Bakary Sako will have been pleased with their evening's work.

West Ham's first chance fell to Joao Mario who attempted a volley from Hernandez's knock-down but his connection was poor and the ball flew wide of the target after four minutes.

Hernandez was poised to open the scoring six minutes later when Sam Byram's cross fell to him at close range, only for James Tomkins' flying tackle to take the ball away from danger.

Palace punished their hosts' wastefulness after 24 minutes when Andros Townsend was allowed to sprint deep into West Ham territory and clip the ball to the middle of the penalty area where the unmarked Benteke powered a header beyond Adrian.

The visitors were dealt a blow five minutes before half-time when Sako had to be withdrawn, the Malian midfielder limping off following a heavy challenge by Pablo Zabaleta.

And three minutes later they were pegged back. Tomkins made a late challenge on Hernandez in the penalty area and Noble expertly dispatched the resulting spot-kick into the bottom-left corner.

Wayne Hennessey made a reaction save five minutes into the second half to keep the scores level, parrying Hernandez's bullet header away from danger after good work by Joao Mario in the build-up.

Without Sako's industry, Palace struggled to create chances for Benteke to restore their lead but their well-drilled midfield battled hard to keep the ball away from Joao Mario and Cheikhou Kouyate.

Declan Rice fired over the crossbar from the edge of the box after 64 minutes as West Ham began to make a concerted push for all three points, and Joao Mario sent over a dangerous cross that evaded everyone when only a touch was needed to send the ball in.

Aaron Cresswell might have capped an all-action performance with the winner 15 minutes from time, but his header went over the crossbar and West Ham settled for a share of the points.