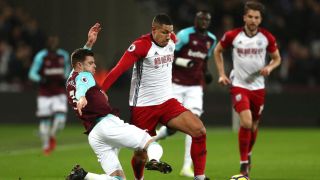 The West Ham supporter whose comments provoked an angry response from West Brom's Jake Livermore has been indefinitely banned from home and away matches.

After being substituted in the second half of West Ham's 2-1 win at London Stadium this month, Livermore appeared to react to a fan close to the visitors' dugout and was led away.

According to West Brom, Livermore was provoked by a comment made about the death of his infant son in 2014.

And following the conclusion of an investigation, the Hammers have taken now action aimed at preventing the individual in question from attending the team's matches.

The Club have issued an indefinite ban to the supporter involved in a verbal altercation with Jake Livermore.January 12, 2018

"West Ham United have issued an indefinite ban to the supporter involved in a verbal altercation with West Bromwich Albion's Jake Livermore," the club said in a statement.

"After a full investigation conducted by the club, which included statements from supporters in close proximity of the incident and evidence from Jake Livermore and West Bromwich Albion officials, the individual was found to have violated a number of London Stadium ground regulations and will be unable to attend home or away matches with immediate effect."