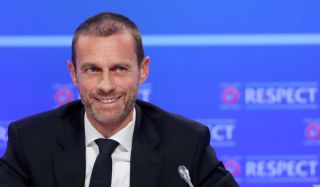 The 55 member associations of European football’s governing body UEFA have been invited to join a conference call on Wednesday for an update on plans being drawn up to manage the impact of the coronavirus pandemic.

Here, the PA news agency takes a look at what is under consideration.

UEFA has invited the General Secretaries of its 55 associations to a video-conference on Wednesday to share an update on the progress made by the two working groups created two weeks ago and to discuss options with the potential rescheduling of matches.— UEFA (@UEFA) March 30, 2020

Getting the 2019-20 season completed remains the firm commitment of associations across the continent, despite the situation worsening since the last UEFA meeting on March 17 when a working group was set up to look at the fixture calendar.

When are they looking to finish?

Leagues across Europe – with the notable exception of Belarus – are in shutdown and in many cases competitions have not fixed a return date.

Those leagues which traditionally finish in May are understood to be working to create the conditions to enable play into July and even August if necessary. In England, the Football Association has relaxed its regulations to allow the 2019-20 season to continue beyond June 1.

There was an initial commitment after the March 17 meeting to wrap up the season by June 30, but it is widely accepted now that this will not be possible and the European club finals have all been postponed indefinitely.

How will the Champions League and Europa League be finished?

As a result of the COVID-19 crisis, UEFA has today formally postponed the following finals, originally scheduled for May 2020.@UWCL@EuropaLeague@ChampionsLeague— UEFA (@UEFA) March 23, 2020

As things stand, with great difficulty with huge restrictions on overseas travel. No ideas were off the table when UEFA’s last meeting took place, and one-legged ties from the quarter-finals onwards could be one solution.

A late finish to the current season, coupled with a fixed new start date for the delayed Euro 2020 finals, would suggest ways need to be found to curtail the 2020-21 campaign.

But it is understood there are no plans as it stands to reduce the calendar, but instead to squeeze it. This may mean looking at, among other things, shortened winter breaks.

A second working group has been looking at the economic and regulatory impact of the pandemic, and as part of that player contracts, which run until June 30, are being examined, in conjunction with similar work being done under the auspices of world governing body FIFA.

It is understood a dispensation could be made that these run until the natural end of the season, as this is the intention of the June 30 date in normal circumstances. But crucially there will need to be agreement that clubs will have to extend deals for all players beyond June 30, not just those they wish to retain.

Transfer windows have also been under discussion among the second UEFA group. The timing and duration of the windows are a matter for each individual national association, but UEFA members may seek some form of alignment and uniformity.