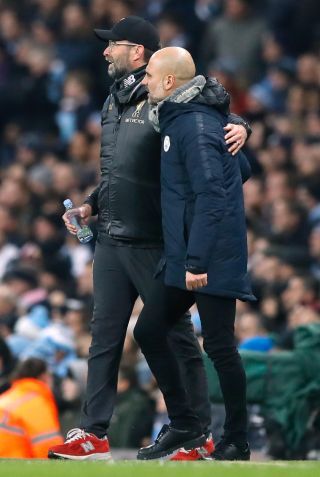 Manchester City’s victory over Leicester on Monday night sent them back to the top of the Premier League table, a point clear of Liverpool with just one match left to play.

Here, Press Association Sport takes a look at what could lie ahead for both teams during the final day of a tense title race on May 12.

The formula is simple for City – win and be crowned champions. That might sound easy enough, given Brighton theoretically have ‘nothing left to play for’ after Cardiff’s relegation was confirmed. However, the Seagulls pushed City in the narrow 1-0 FA Cup semi-final defeat at Wembley and come into Sunday’s match on the back of a determined performance in the 1-1 draw at Arsenal. Since losing at Newcastle on January 29, Pep Guardiola’s side have won 13 straight Premier League games – but will that prove unlucky for some at the Amex Stadium?

Most likely in any other campaign, Liverpool would be running out at Anfield on Sunday with the Premier League title already in the bag. However, such has been City’s relentless drive, the fate of Jurgen Klopp’s side is now out of their own hands. Liverpool face a potentially draining Champions League semi-final second leg against Barcelona on Tuesday night. Whatever their European result, though, the Reds know only a win over a Wolves side who already have seventh place sewn up will keep alive hopes of snatching a dramatic domestic title success.

Can it be Sunday now please…#PLpic.twitter.com/lT0qgCdEC8— Premier League (@premierleague) May 7, 2019

A draw could also prove enough for Pep Guardiola’s side depending on the outcome at Anfield – but no City fan would want to be left listening out for the score on Merseyside. While Chris Hughton’s team are without a Premier League win since early March, they have drawn three out of the past four matches and were close to leaving Tottenham with a useful point before Christian Eriksen’s late strike. Could that just give Liverpool a sniff of capitalising on any City slip-up? Well, in a title race so close, who would bet against the biggest prize being settled by the narrowest of margins?