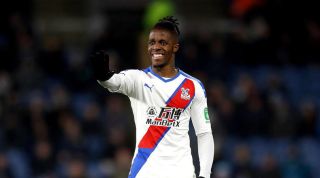 Wilfried Zaha is keen on a move to Tottenham and has instructed his agent to work on a deal, according to reports.

The Crystal Palace winger handed in a transfer request last summer in a bid to force through a move to Everton.

Zaha had also been linked with Arsenal before the Gunners signed by Nicolas Pepe, his fellow Ivory Coast international, from Lille.

The 27-year-old was welcomed back into the fold by Palace supporters and manager Roy Hodgson despite his desire to depart ahead of the 2019/20 campaign.

But the former Manchester United forward remains keen on a switch to a member of the Premier League’s big six, with Tottenham now thought to be the most likely destination.

According to the Daily Mirror, agent Pini Zahavi is working hard to try and take one of his newest clients to north London.

However, it will not be easy for Spurs to pull off a deal, with Palace adamant that they will not accept anything less than £80m for their star man.

Both Arsenal and Everton proved unable or unwilling to meet the asking price in the summer, and Palace did not budge even after Zaha had asked to leave.

Jose Mourinho is keen on new additions in January as Spurs attempt to secure a top-four finish and a place in the Champions League.

But the Portuguese will have trouble convincing chairman Daniel Levy to sanction an £80m offer for the Palace winger.

Chelsea have also been linked with Zaha but appear to favour Borussia Dortmund wide man Jadon Sancho, while Zahavi has recently sounded out Bayern Munich.

The Ivory Coast international may once again be denied a move away from Selhurst Park, where he is under contract until 2023.