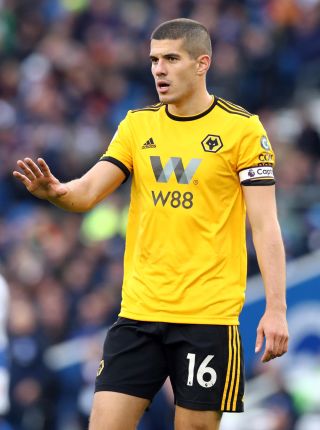 Striker Deeney has called Sunday’s match at Wembley “just another game” which does not excite him.

Wolves are narrow favourites against the Hornets as they look to reach their first Cup final since winning it in 1960.

Nuno Espirito Santo’s side are in the last four for the first time in 21 years and Coady insisted it does not get much bigger.

“It’s a big game in England – it’s the semi-final of the FA Cup. It’s huge and these really are the games everyone wants to play in,” he said, when asked about Deeney playing the game down.

“But we know it’s two good teams going up against each other. Watford have done fantastically well this season.

“We played them earlier in the season (losing 2-0) and it was probably our toughest game.

“It was really tough so we know what to expect but we will train right for it because it’s a big game.

“It’s a semi-final and everyone is that close to a final. It’s huge and they will want to win it as much, but we’re looking forward to it.

“We’re focusing on ourselves at the minute and what we want to do and how we’re going to go about it, but we will make sure we’re ready for it.”

Coady is the only member of the Wolves squad to have reached this stage before, losing the 2014 semi-final to Hull while at Sheffield United.

The Blades lost that match 5-3 after being 2-1 ahead at the break.

He said: “It was a special day. No-one was really expecting much of us because we were a League One club at Sheffield United, and at half-time we were 2-1 up and we were all sat in the changing room at half-time kind of laughing.

“If we had got into the final, we would have gone into Europe, so you’re thinking ‘League One club in Europe’ and we were all sat there having a bit of a laugh about it.

“But we were really close to doing it. I just think the day in general is special for everybody.

“The atmosphere was amazing – Sheffield United took thousands upon thousands of fans, like Wolves will do, but we need to make sure we put on a good performance because we want it to be an even better day than that was.”

And the 26-year-old admitted he thought he would never get another opportunity.

He said: “Yes, it was horrible. We came in after the game and it was a horrible feeling knowing you were there and that close.

“There was a big gulf between the teams at the time because Hull were in the Premier League. Looking back on it now, I think we were so close but it was horrible knowing we were so close to an FA Cup final.

“We need to make sure we don’t have those same regrets on Sunday.”