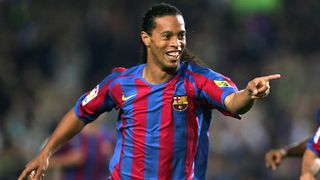 Brazil and Barcelona icon Ronaldinho will officially retire from football this year, drawing a line under one of the most memorable careers of the 21st century.

Although the 37-year-old forward has not played competitively since 2015, he provided enough magic moments on the biggest stages to thrill fans for a lifetime.

From audacious skills to unstoppable strikes and dazzling dribbles, Ronaldinho had it all.

Here, we select five moments when he indisputably scaled the heights.

GAL MORNING!!! Is this one of Ronaldinho’s best goals? Today marks 11 years since this strike  November 25, 2017

Not Ronaldinho's most beautiful goal but one of his cutest if, as he maintains, he meant it. Brazil's 2002 World Cup quarter-final against England was locked at 1-1 when the then-Paris Saint-Germain player lined up a free-kick 35 yards from goal to the right. Those in a packed penalty area anticipated a cross – not least England goalkeeper David Seaman, who was aghast to see the ball sail over his head and into the far top corner.

Ronaldinho was later sent off but Brazil held on and would go on to lift their fifth world title.

Modern LaLiga history might have panned out very differently if Barcelona president Joan Laporta had managed to secure promised marquee signing David Beckham in 2003. Real Madrid beat them to the Manchester United favourite, leaving Barca to move for Ronaldinho in what would be one of football's most productive acts of face-saving.

It was love at first sight for the Camp Nou faithful as their €30million signing collected possession in his own half, stormed forward, slalomed past Jose Luis Marti and Francisco Casquero and smashed a thunderous strike in off the crossbar from 30 yards to salvage a 1-1 draw.

The toe poke is generally the preserve of the goal-poaching striker, pouncing effectively from somewhere close to the goal-line. In a March 2005 Champions League tie at Chelsea, Ronaldinho reinvented one of football's most scruffy techniques and made it something otherworldly.

Receiving the ball from a young Andres Iniesta he pivoted his right boot twice, squaring up Ricardo Carvalho before stabbing an improbable strike into the corner with minimal backlift from the edge of the box. Chelsea ultimately triumphed 4-2 on the night and 5-4 on aggregate, with their fans enjoying the bonus of witnessing one of European football's great goals.

Real Madrid fans have seen some truly wonderful players grace the pitch at the Santiago Bernabeu, but how many Barcelona players have had such an impact they have been applauded by the home supporters? Ronaldinho enjoyed that honour in November 2005, turning in a mesmeric display as Barca tore Madrid apart in an emphatic 3-0 win.

He scored twice but it was his second that really left those in attendance marvelling, as he jinked past Ramos and Ivan Helguera before unleashing a rasping finish at the end of a 50-yard run. Ronaldinho would go on to deservedly lift the Ballon d'Or later that month, with Barca on the way to back-to-back LaLiga titles and 2005-06 Champions League glory.

Following his Barcelona exit in 2008 and a patchy stint at AC Milan, Ronaldinho was back in his homeland with Flamengo. A renaissance of sorts occurred and he was restored to the Brazil team for a run of friendlies having missed the 2010 World Cup.

Wearing the captain's armband with the Selecao 1-0 down in Mexico, Ronaldinho stood over a dead ball on the left-hand corner of the opposition box and swept expertly into the far top corner. It proved the last of his 33 goals in Brazil colours.