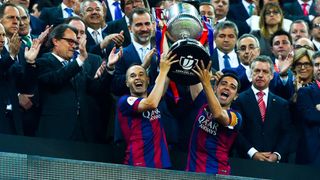 Iniesta, 34, will bid farewell to the LaLiga champions in their final game of the season against Real Sociedad on Sunday.

His former midfield partner, Xavi, was full of praise for Iniesta's incredible career at Barca.

"Other players will stay and Barcelona will keep on winning," he said, via Marca.

"It's clear that Barcelona will continue, but players like him are unique. Iniesta is an example as a player and as a person."

Iniesta has made 43 appearances in all competitions this season, helping Barca to another league-cup double.