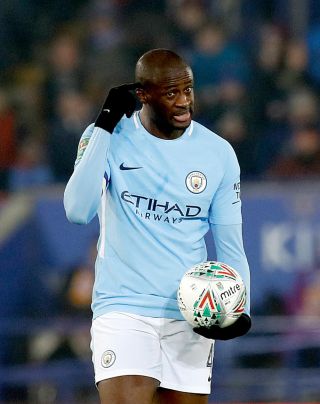 Former Manchester City and Barcelona midfielder Yaya Toure believes racism in football is getting worse because “fans are more stupid than before”.

In recent months there have been a number of incidents at matches and the trend shows no signs of declining.

In November, Brescia’s Mario Balotelli – a former team-mate of Toure – called fans who shouted racist abuse at him “small-minded” and “imbeciles” while Cagliari fans made monkey noises towards Inter Milan’s Romelu Lukaku earlier in the season.

Former @ManCity midfielder @YayaToure on @LFC's grip on the Premier League title race & why Sadio Mane should not only be crowned African Player of the Year next month but should also have won the Ballon d'Or pic.twitter.com/UJvMSnsX0Q— Carl Markham (@carlmarkham) December 19, 2019

This month Italian newspaper Corriere dello Sport was criticised for the headline ‘Black Friday’ alongside images of Roma defender Chris Smalling and Lukaku.

But the problem is not restricted to Italy, with a man arrested after this month’s Manchester derby for allegedly making a racist gesture.

Toure has spoken with FIFA about what can be done but knows there is no quick fix.

“I’ve had a chat with FIFA because this is something very important which we have to look at carefully,” said the former Ivory Coast international.

“I know it will be difficult because the way to win this case is going to be very long.

“Fans, people, now are more stupid than before.

Toure is out in Doha at the Club World Cup as a guest of FIFA and, while he was not that impressed with Liverpool’s last-gasp win over Monterrey in the semi-final, he believes Jurgen Klopp’s side are well set to win the Premier League title ahead of his former club City.

“Liverpool are great, they are doing very well and they deserve their position at the moment,” he added.

“There is a long way to go but Liverpool are a good side and they look much stronger than last year.

“The way I see City is their form this year has been quite complicated but 10 points in front Liverpool have a good, good chance.

“When you see the league today there are a few teams who are quite disappointed, like Arsenal and a couple of others, but Liverpool have the chance to have the honours this year.”

Toure is also a fan of Liverpool forward Sadio Mane, whom he believes will win next month’s African Player of the Year and should have won the Ballon d’Or which was awarded to Lionel Messi a couple of weeks ago instead of finishing fourth.

“To be honest he deserved to win the Ballon d’Or first. In Africa we don’t see any better players than him,” added the Ivorian, who said he wants Liverpool to beat Flamengo in Saturday’s Club World Cup final.

“Did you see the votes, did you see what he did in the last year, how many goals he scored, what he achieved with Liverpool?

“For me it is a shame when a team wins this trophy (the Champions League) and the winner of the Ballon d’Or is not coming from there.”