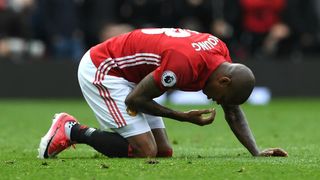 Ashley Young believes Manchester United could have been fighting for more than Champions League qualification had his side not "thrown away" so many points.

United recorded their 10th home draw of the season on Sunday after Gylfi Sigurdsson's late free-kick cancelled out Wayne Rooney's penalty to claim a 1-1 draw for relegation-threatened Swansea City at Old Trafford.

Jose Mourinho's men extended their unbeaten run to 25 matches as a result - setting a new club record for a series of games without defeat in a single top-flight season - but they are fifth in the Premier League, a point behind rivals Manchester City.

And Young feels United would be pushing for greater honours than a top-four finish had they been able to hold on to leads at home.

"After 10 draws at home, you think about the points that we've lost and thrown away and where we could have been in the league," Young told MUTV.

"A lot of people have been talking about fourth spot in the league but I thought we could go even higher than that.

"We've got a lot of tough games but as long as we're prepared I'm sure we can go and get the points that we need."

Manchester United could also book a Champions League place through the Europe League, with Mourinho's men facing Celta Vigo in the first leg of their semi-final on Thursday.

But they will have to do so without Luke Shaw and Eric Bailly, who joined the club's lengthy injury list during the Swansea draw, and Young accepted it will be tough with so many players missing.

"We'll have to recover again for the next few days and then we've got that trip [to Vigo] to look forward to," Young added. "It's not ideal getting a few more injuries on top of the ones we've already got but we have to keep going.

"I think that's all it's been over the last month. You play a game, recover, and play another game. That's exactly what will happen. We have plenty of incentive to get ourselves up for the Europa League semi-final and a chance to get to the final. If we can win that, we'll get into the Champions League."