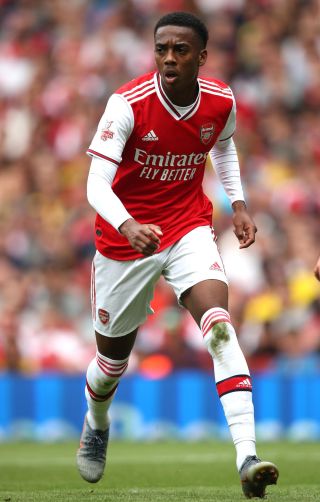 In what should prove to be their most difficult assignment in their attempts to qualify from Group F, head coach Unai Emery made seven alterations from the weekend’s disappointing draw at Watford and saw his team run out comfortable 3-0 winners.

Willock and Saka, as well as Emile Smile Rowe, were the youngsters given a chance to impress and the former opened the scoring in the first half.

Saka would then double the advantage with a fine finish before laying on a late third for Pierre-Emerick Aubameyang, with both second-half goals coming after Frankfurt midfielder Dominik Kohr had been sent off.

There was trepidation from Arsenal supporters before kick-off as David Luiz, who has conceded two penalties in five games for he club, was partnered in defence by Shkodran Mustafi – the Germany international having been told by Emery he was free to leave this summer.

That was also partly down to the profligacy of a new-look Frankfurt front-line after the club, who reached last year’s semi-final only to lose on penalties to the eventual winners, sold attacking trio Luka Jovic, Ante Rebic and Sebastien Haller over the summer.

Djibril Sow arrowed a shot straight at Martinez, making his first Arsenal appearance since December, as the hosts started positively.

They should have been behind soon after, though, as 18-year-old winger Saka crossed in for the onrushing Lucas Torreira, who sent his effort well over the bar from all of eight yards out.

Aubameyang angled a shot away from Kevin Trapp’s goal before Martinez was forced into a smart, low save to deny Filip Kostic from a similar position to his earlier chance.

Willock was next to pass up a decent chance to open the scoring, striking a shot wide after some fine solo work from Aubameyang allowed the Gabon striker to cross for the midfielder.

Granit Xhaka did well to press high up the pitch and wrestle possession from Sow then play a slide-rule pass into Smith Rowe’s run – Trapp making the save with his foot to deny the Arsenal youngster.

After wasting their opportunities, Emery’s side eventually broke the deadlock seven minutes before half-time as Saka freed Willock and he twisted inside before seeing his shot take a wicked deflection off David Abraham, loop up over Trapp and bounce in off the crossbar.

Martinez ensured Arsenal would go in at the break in front as he made another decent stop to keep out Andre Silva on the stroke of half-time.

Bas Dost, signed from Sporting Lisbon to at least replace some of the goals lost with the summer sales, headed tamely wide early after the restart.

Silva – also a new attacking recruit – then missed the target as the task of filling the collective 56-goal void left by the departures of Jovic, Haller and Rebic was clear for all to see.

In keeping with the opening 45 minutes, Arsenal would almost immediately create a chance of their own, Martin Hinteregger sliding in to block Aubameyang’s strike after he was found by Willock.

Xhaka then came within inches of scoring a fortuitous second as his intended cross from a free-kick wrong-footed Trapp and hit the crossbar.

Trapp made further saves to deny Willock and Saka, before the latter was clipped by Kohr, who was shown a second yellow card by referee Davide Massa with 11 minutes remaining.

Aubameyang then missed an absolute sitter to wrap up the win but would make amends by slotting home the third after Saka’s fine bending strike had already secured the points.