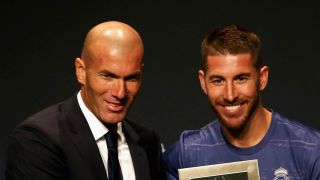 Sergio Ramos says Zinedine Zidane leaving Real Madrid was "bitter", but the club captain is "thankful" to the French coach for leading the club to a trio of consecutive Champions League titles.

Zidane resigned from his post after Madrid downed Liverpool in Kiev to defend their Champions League crown again, with Julen Lopetegui confirmed as his replacement.

Lopetegui was subsequently fired by Spain on the eve of the World Cup, Ramos' side crashing out of the World Cup at the last-16 stage to Russia on penalties under replacement Fernando Hierro.

And in a social media post the day after Spain's shock exit, Ramos summed up Madrid's 2017-18 season as he looked ahead to the new campaign.

"Today our season ends and it's time to look back on the season as a whole," Ramos posted on Instagram.

"Don't think we don't analyse things and that we're not conscious of our mistakes and of what we got right. We are, and all the more because of the difference it makes to all of you who follow us and support us. We live everything with passion and with responsibility.

"With Real Madrid it was a season with lows, that is certainly true, but also one great high. In domestic competitions we were unsuccessful, but we conquered Europe winning the Champions League for the third year in a row, which was an historic achievement.

"Zidane’s goodbye was a bitter way to follow it up but everyone is free to make their own decisions. We'll be forever thankful to our coach."