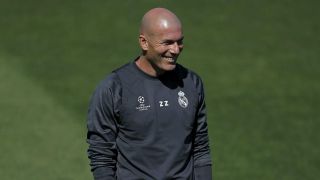 Zinedine Zidane will not allow Real Madrid to ease up on rivals Atletico as they take a 3-0 advantage into the second leg of their Champions League semi-final clash.

Cristiano Ronaldo's hat-trick at the Santiago Bernabeu saw Madrid put one foot in the Cardiff final, with Atletico needing something approaching a miracle in Wednesday's return meeting.

Zidane's side are closing in on a Champions League and LaLiga double, but the Frenchman urged his side not to lose focus on the challenge that awaits at the Vicente Calderon.

"We're going to approach the second leg the same way we have done every game – to start strongly to try to win the game, that's our aim," he said.

"We want to play well and give 100 per cent to win the game, then we'll see what happens. But we're going to keep faith with how we do things, which is to try to win.

Everything is ready in our quest to reach the Champions League final!May 9, 2017

"What we have to do is to give 100 per cent to win because it's been eight or nine months of competition and the players have worked very hard throughout this period, but these things can happen in football. Every three days you're up there, you need to produce the goods, you need to deliver.

"I think we've done a very good job until now, but we've got to prove ourselves again, against Atletico, then on Sunday [at home to Sevilla in LaLiga], and then the next week too.

Madrid have not won the top flight and Europe's elite competition in the same season since 1957-58, but are close to ending that long wait, with a game in hand over LaLiga leaders Barcelona, who also have 84 points.

Zidane feels it would a fitting achievement for a club of Madrid's prestige.

He added: "The facts are there. We look at the club, how big it is, our fans, those who support us, and we want to achieve the maximum, but we have to prove that we're good enough, starting on Wednesday. We're going to give our all to progress, to qualify for the final.

"We are all rowing in the same direction, the fans too. Everything will be decided now. We like to be in this position. We have a final on Wednesday, three more in the league, but first we're going to focus on the game against Atletico Madrid.

"I don't think there's an issue with the players' attitude [being 3-0 up], there are risks involved in football; you have to play, you don't win before the whistle, and we've got to put in a good performance if we want to go through."