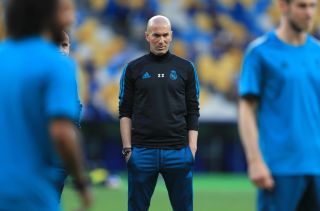 Leaders Real have suffered only one league defeat this season, but sit just a point ahead of bitter rivals Barcelona.

Weekend opponents Levante sit 13th in the table and are not a team in form, having lost five of their last six league fixtures.

However, the club is clearly bolstered by a home crowd and have only lost three league fixtures at the Estadi Ciutat de Valencia this season, as opposed to 10 losses on the road.

“Levante have picked up 20 of their 29 points at home, that shows the type of game it’ll be,” Zidane said to his club’s website.

“It’s going to be tough, we’ll have to be ready to produce a good performance.”

After the Levante assignment Real face their two biggest home games of the season to date, with a Champions League last-16 first leg against Manchester City on Wednesday followed by the second Clasico of the campaign against Barcelona on the Sunday.

Zidane is not allowing himself to be distracted, however, and insists his club’s focus is entirely on Levante.

“We work hard every day. From pre-season, we know every day counts,” he said.

“The final training session ahead of tomorrow’s game is important. We’re only thinking about the next match, which is away from home against Levante. That’s the only thing on our minds.

“We have to be focused on our efforts day to day, and give 100 per cent. That’s the only thing you’re able to control and we’re going to give it everything we’ve got out on the pitch. We don’t know what’s going to happen tomorrow.”

Real will be without Gareth Bale and Luka Jovic this weekend, with the forward duo both struggling with gastroenteritis.

Levante boss Paco Lopez is looking to pull off another big win.

His side beat Barcelona 3-1 in November and won 2-1 against Real at the Bernabeu  last season.

Though his squad have struggled recently, Lopez explained that high-profile fixtures motivate rather than daunt his team.

“Real Madrid are a team with very good players and by statistics we know that it is very difficult to beat them, but the possibility exists and as long as there is possibility in football we will try,” Lopez said at a pre-match press conference covered by AS.

“Levante is characterised by being not very conservative. We will try to make things difficult for Real Madrid.

“It is very difficult against Madrid, but they also have some weak points and we will try to attack them.

“We all like to win every game and as we know it is so difficult. We won at Barca, last season we won at the Bernabeu and we have one more motivation.

“But we are aware that historically it is very difficult to win these games and there are many coaches who have not been able to beat them.”