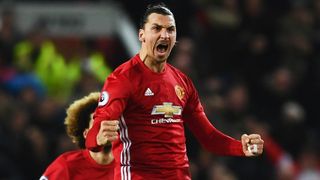 Zlatan Ibrahimovic provided an update on his recovery from a serious knee injury in the only way he knows how.

Ibrahimovic is facing a prolonged stint on the sidelines after rupturing his right anterior cruciate ligament during Manchester United's Europa League quarter-final second leg against Anderlecht in April.

The 35-year-old's future at Old Trafford remains uncertain, having only arrived on a one-year deal with the option of a second, but the Swede is determined to prove he is not a spent force at the highest level.

After taking England by storm with 28 goals in all competitions, a barefooted Ibrahimovic used Instagram to showcase his improving physical condition as he compared himself to a lion.

If there is one player not to underestimate, it is the former Paris Saint-Germain, Barcelona, AC Milan, Inter, Juventus and Ajax striker.