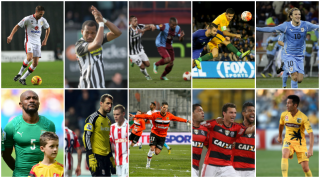 Very few footballers retire at the top of their game, or even with the club they made their name with. As such, it's easy to let former stars of the Premier League fade from view until their retirement is all but assumed. Here's a selection of former-Premier League names who you might have thought had hung up their boots...

The former Manchester United man’s best year was undoubtedly in 2010 where he not only won the Europa League with Atletico Madrid, scoring a brace in the final, but also had a superb World Cup where he was the joint top-scorer with five goals, helping Uruguay to a fourth-place finish.

However, Forlan was 31 then so it might surprise a few to learn that the 37-year-old is still an active player, having last played with his boyhood club, Peñarol, helping them win the Primera División last season.

Didier Zokora is more or less known for his three years at Tottenham where despite a promising start to his Spurs career, he eventually found himself relegated to the substitutes' bench.

The 35-year-old Ivorian departed north London and has since gone on to play for Sevilla and Turkish sides Trabzonspor and Akhisar Belediyespor, before moving to Indian side Pune City in 2015.

The Frenchman was a vital part of the Chelsea side that won the double in 2010, but Malouda fell down the pecking order and was even demoted to Chelsea’s reserve team at one stage.

Moves to Trabzonspor and FC Metz followed but Malouda, now 36, is currently under contract with the Delhi Dynamos in India. His latest stint was a loan move from India to Egypt where he played for Wadi Degla.

The former Manchester City midfielder had an inconsistent two years in England, and when he moved to Galatasaray no one predicted that he’d ever reach the level that he did. However, Elano impressed in Turkey, as a result became a leading man for Brazil at the 2010 World Cup, where he scored two goals.

A move back to Santos in 2011 saw him return to the Brazilian league for the first time in seven years, where he also played for Gremio and Flamengo before returning to Santos again. The 35-year-old has also had two stints with Indian side, Chennaiyin, where he was a marquee player.

Danish goalkeeper Thomas Sorensen became a household name in the Premier League during spells at Sunderland, Aston Villa and Stoke City. Still a first choice keeper at the Britannia Stadium in 2010, the Danish international eventually lost his place to Asmir Begovic and remained a back-up goalkeeper for the Potters until 2015.

Having turned 40 a couple of months ago, Sorensen is still an active player, plying his trade in Australia with Melbourne City.

The former Arsenal defender had little luck breaking into the Gunners’ first XI, but eventually found his stride as a first-choice defender for Birmingham City. A move to West Ham followed in 2007 where Upson’s stock increased further, being named captain two years after his move to the Hammers.

The Englishman featured for England at the 2010 World Cup where he scored England's only goal in the 4-1 defeat to Germany. A move to Stoke followed a year later, whereupon Upson was only regarded as a back-up defender again. Since then, the 37-year-old has featured for Brighton & Hove Albion and Leicester City, while his latest stint was with MK Dons where the Dons were relegated from the Championship.

The former Arsenal youngster was brought to north London in 1999 from the famous Clairefontaine academy in France, and waited seven years before he was given a proper run with the Gunners. Despite seeing more game time, Aliadiere only featured regularly in Arsenal’s League Cup campaign as they reached the final, losing to a more experienced Chelsea side, 2-1.

Aliadiere moved to Middlesbrough the next season and after three years at the Riverside Stadium, moved back to France with FC Lorient. His latest stint was with Qatari club, Umm Salal SC, and at 33 years of age he is currently a free agent.

Tim Cahill was a key player for Everton in his eight years at Merseyside, becoming part of the furniture in the Premier League in the process. The Australian was eventually deemed surplus to requirements and was sold to the New York Red Bulls in 2012, where he showed he still had something left in the tank.

The last two years for the Australian have seen him play in China, and his latest move sees him move to Melbourne City as a very valuable free agent, even at the age of 36.

38-year-old Luis Garcia will forever be known for his three year stint at Liverpool from 2004 to 2007, where he played a key role in helping them win the Champions League and FA Cup.

Exclusive: Santi Cazorla - Premier League is 'the most difficult in the world"

The Spaniard has since, become a footballing nomad having played in various nations such as Greece, Mexico and India (coming out of retirement in 2014 to play in the Indian Super League). Most recently he played for Australian side Central Coast Mariners and is currently a free agent.

Known more for his name rather than his ability, the world was introduced to Eric Djemba-Djemba in 2003 when Manchester United bought him from Nantes. However, the Cameroonian struggled to keep his place in the side and was sold two years later after just 20 league appearances.

Since then, Djemba-Djemba has played all over the world, in India, Qatar, Denmark, Israel, Scotland and Serbia. Now 35, the midfielder currently plays for Persipa Padalarang in the Indonesian Village Sunday League.