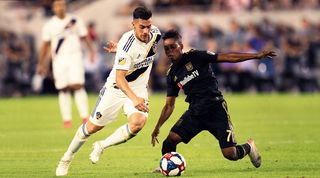 Six minutes on the clock, 26 players to guess - 13 from the Western Conference, 13 from the Eastern.

Remember to tweet your scores @FourFourTwo and share with your friends - especially if they're over in the US.

It's now in its 25th edition, but no one really had much time for Major League Soccer before David Beckham upped sticks from Real Madrid and revitalised the league.

It's been a long road since Becks changed the sport in the US, back in the mid-2000s. It was the first match of a new season last weekend but these days, he isn't playing but setting his own club up.

You know the players - but how many of the MLS's teams can you name? We'll accept the city or their nickname.