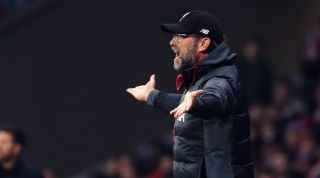 Liverpool are currently living as other successful teams have in the past, with anything short of perfection incurring a chorus of contrived glee. Manchester United experienced that in the 1990s, Arsenal briefly flirted with it in the decade that followed, and Chelsea and Manchester City have both occupied a similar place in the years since.

Each of those teams were different and not all of those periods were truly dynastic, but they remain bound by the responses they provoked. People loved it when those teams lost.

As they do with Liverpool. The defeats to Watford and Chelsea were almost national events. So much so that had the British weather been slightly more mild, it might have brought out the bunting and the street parties.

It's an inadvertent mark of respect; when the public turns like that, it actually describes a very deep admiration.

Also, treat the schadenfreude as a type of novel relief. When a team sustains its form for a long period of time, their excellence not only becomes normalised – and slightly dull – but the commentary around their achievements becomes repetitive. Before long, the radio and television coverage turns sycophantic and the print reaction is no different. It’s saccharine and tired and, quite honestly, for supporters of underperforming clubs or those lacking financial parity, it's probably hard to bear.

That’s truer in some cases than it is others. This Liverpool side are stylistically diverse enough to inspire rich prose. There’s a power and life to their football and also an originality. In comparison to Jose Mourinho’s first Chelsea team, for instance, who were so incredibly impressive but still so mechanical, Klopp's team invite a much more lyrical response.

So, the reaction to this little slump is being overdone. People are criticising Liverpool now because the opportunity exists to do so. On the basis that their form will revert back sooner rather than later, it’s better to vent that irritation now, while the mood is right and the opportunity is there.

But with that in mind, what a fascinating footballing response awaits; it really shouldn’t be assumed that Liverpool will just click straight back into gear. To believe so is to probably underestimate how hard earned their momentum actually was. It's also to make light of how damaging defeats can be to teams who aren't used to losing.

At their core, Liverpool are about talent. No question. They may not have always bought players off the highest shelf, but they've still built this side with plenty of rare ability. Another factor was Klopp. Of course. The excellence of his communication and its resulting effect began this project and nothing that has happened since would have been the same without him. Or would even have happened at all.

But, increasingly, the most powerful force within this specific run of results had been ethereal and self-perpetuating. Liverpool are a team of aura and one which has enjoyed an increasingly firm psychological hold on their opponents. The more they won, the stronger that grip became.

Also, the more their own players trusted each other. The more confidence they had, the stronger their mechanics were, and the more their patterns of play grew out of habit alone.

Think of that in practical terms and consider the superiority that it can foster. The basic point is that a team without hesitation is a very strong one. Its players make runs more instinctively, they make decisions without so much as a microsecond’s pause and, in comparison to the average side, which is usually a jumble of neuroses, that amounts to a very significant advantage.

It's a head start in games, really. The happy product of allowing all that talent to bathe in an incubating, uninhibited warmth.

ALSO READ: Liverpool's Premier League record attempts: what could they still break, and what have they already achieved?

Anybody in possession of the ball is free of doubt. Deep into an unbeaten run, there’s nothing to fear in a bad touch or a misplaced pass.  Without really being able to explain why, that breeds greater accuracy and fluency and – ultimately – success. Time and time again.

Whether it's reflected by statistics or not, it seems to be a situation in which everything goes right. An extended moment of pure harmony. Maybe it's even muscle memory; players become so used to seeing their passes find teammates and their shots hitting the net that, over time, their expectations become self-fulfilling.

The irony is that Liverpool are often drawn in purely physical dimensions. They are "Mentality Monsters". Resilient. Relentless. They outwork their opponents. All of which may be true, but there’s also an emotional lightness to them too – a lack of baggage – which has also been extremely important. It has equipped them with clarity of thought and a resistance to pressure, but can also can be seen in the decisive moments of flair that have decorated this great run. In the backheels, the flicks, the risks. Liverpool's tremendous muscularity has been oiled by this commodity, however it's described, and that's been very precious.

It's where Trent Alexander-Arnold's quick corner against Barcelona came from. Or Fabinho's banger against Manchester City. Or even that Curtis Jones goal against Everton. These are players who became trained, over time, to think only of what could go right.

But this is also what dissipates after a loss, making what happens next so interesting.

Above all, it shouldn’t be underestimated just how rare a territory Liverpool have been inhabiting and how difficult a place it can be to get back to. Acquiring all of those advantages is a struggle, and how quickly they can be retrieved will show just how great a team this is.