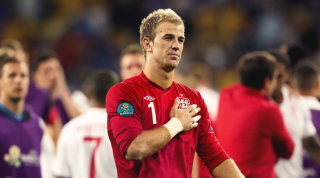 In a tournament where nothing much happened, the England vs Italy penalty shootout gave us perhaps the most iconic moment of Euro 2012.

Andrea Pirlo places the ball on the spot. Joe Hart bounces across his penalty line like a Space Invader shooter. This is it: a Lombardian wine connoisseur against an anti-dandruff shampoo ambassador. Hart dives, exaggeratedly, in the event that Pirlo smashes the ball to the keeper’s right - but the Italian does no such thing, cutely scooping it down the centre of the goal mouth.

Pirlo’s panenka has become the profile picture of his career - a ridiculously aloof moment in the heat of history - a deep-lying genius doing what he does best: hoodwinking his opponent with deftness and sleight of expectation. Hart, alternately, plays the role of a dog gazing into the middle-distance of where its owner pretended to throw a ball.

Yet Pirlo vs Big Joe was never a foregone conclusion. When England faced the Italians in that shootout, hope was limited - given the format - but it rested on the England keeper’s (head and) shoulders.

This was arguably the best goalkeeper the Three Lions had produced without a moustache or a perm since ‘66 - admittedly, strict criteria. After Seaman retired, Sven’s England had everything, minus a statuesque stopper - just the jittering presence of David James or Paul Robinson. Chris Kirkland was a perennially-knocked nearly-man - a parallel universe’s David Ospina. The idea of Scott Carson always looked better than the reality, while Rob Green produced a clanger against the USA in 2010 to put clear distance between his reputation and the jersey.

Joe Hart was different. He was born in the fallow era between golden generations, and didn’t emit the same nervous buzz as custodians gone by. He swaggered like he’d downed a couple of Jaegers for Dutch courage, but genuinely believed he belonged between England’s sticks. He may have looked too much like one of the Inbetweeners to have been considered a world class goalkeeper, but Our Joe fighting against an army of Italian penalty takers was England’s best shot of a tournament semi-final.

Andrea Pirlo’s twilight twinkled with the memory of that night in Warsaw, plus a few further effortless masterclasses for club and country. Just a few years later, Joe Hart’s career took an unrelated but instant nosedive. And frankly, it’s kind of unfair.

ONE MISTAKE Why goalkeepers' reputations hinge on howlers

Yes, Hart made mistakes – like letting a Gareth Bale free-kick spiral out of his grasp at the following Euros. Yes, Hart signalled to his own mistakes, with the grace of a cheap magician waving a handkerchief before failing to make it disappear – like audibly swearing in the tunnel before that very game on live TV. But you can’t help but feel for how quickly everything started heading south for the bloke.

This guy kept 53 clean sheets in three seasons at Manchester City, as the club won the Premier League for the first time ever. Quicker than he could say “How could you be Joe Hart-less?”, he was being turfed from the side he’d become an arguable legend for, due to his lack of passing prowess - and that was during an almost unprecedented summer, in which every side in the division was too happy with their option in goal, than to take him. Honestly, how often is every team in the league too content with their goalkeeper to entertain signing the England No.1?

Hart had an almost innate ability to tip anything over his crossbar and he put in sterling performances in City’s two title wins. This was a team in which the other members of the spine were Vincent Kompany, Yaya Toure and Sergio Aguero - he wasn’t there out of pity.

The now ex-Burnley back-up still shares the record for the most Golden Gloves with Petr Cech - who carries incredible prestige, despite a weary late-career spell at Arsenal. Hart conceded fewer goals the season that David De Gea won his only league title - yet the Spaniard went on to have European superpowers flirting with him via fax machine, while Hart went on loan to Turin’s second-best club.

The former England star never got the same post-peak life that most goalkeepers get - a safe but boring spell as a midtable side’s new No.1, where the fans are genuinely grateful for a high-profile name and the media kind of forget you’re not what you once were. Hart was one of the better keepers in the country at the start of the decade and yet the likes of Adrian, Hugo Lloris, Fraser Forster and Ben Foster have all had rosier career paths. Why was Hart’s peak forgotten so quickly?

Perhaps it’s because of who Joe Hart was - unpolished, unfiltered and the kind of guy who seems more at ease sat next to Jamie Redknapp on A League of Their Own than sat next to Megan Rapinoe in a Ballon d’Or ceremony. It’s a similar tale with Jordan Pickford - once a wonderkid, now the subject of memes - probably thanks to his form, but almost definitely helped by his laddish persona. Or Kepa Arrizabalaga, post-League Cup Final tantrum - it’s always the keepers that make the most noise that are given the roughest treatment by fans.

On that night in 2012, Hart swapped places with Gigi Buffon after every spot kick. There was no doubt who you’d fill your net with: there never will be. But the chasm wasn’t between a genuine legend of the sport and some joker from Shropshire.

The years since Joe Hart’s peak haven’t been kind to him, but he was a bloody good goalkeeper all the same. It’s time he was remembered as such.