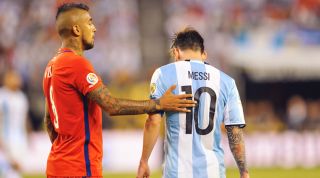 You have five minutes to guess 20 nations.

Messi, Vidal, Neymar, Suarez... for a tournament featuring some of the biggest stars in the world, we don't see an awful lot of the Copa America on these shores.

Still, 2020 was set to be another big one, with two more AFC nations invited and the cream of South America converging in Argentina and Colombia for one big battle.

As today's Arturo Vidal's birthday - any link will do - we're asking you to rack your brains for who might have competed in this tournament in years gone by. Plus one nation that was invited for the first time in 2020.

Just work your way around South American countries and we'll sure you'll get most of them. We've even put an asterisk on the non-CONMEBOL countries, too - aren't we kind?