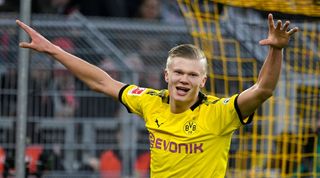 Owen Hargreaves believes that Erling Haaland can help Borussia Dortmund challenge for the Bundesliga title - but doesn’t think the Norwegian would get into Bayern Munich’s starting line-up.

Dortmund sit four points behind Bayern in the race for the German title, with the two teams set to meet at Signal Iduna Park next Tuesday. Haaland fired BVB to an impressive 4-0 win over Schalke on their return to action, to take his tally for the 2019/20 season to an astonishing 41 goals in just 34 appearances.

WHAT'S ON Bundesliga live stream: How to watch Bayern Munich, Borussia Dortmund and the Berlin derby this weekend

With eight games remaining, Hargreaves thinks the Bundesliga title battle is very much alive, but still regards his former club Bayern Munich as heavy favourites - insisting their line-up is so impressive that even Haaland wouldn’t find a way into it.

“Dortmund are definitely still in the race,” the BT Sport pundit told FourFourTwo. “If you look at the games at the weekend, Dortmund looked a bit sharper, and they’ll take a lot of confidence from that. With the game coming up against Bayern, they’ve got to win that - if they do, they’re right there.

“But everyone respects that Bayern are the favourites, even Dortmund, just because of everything they’ve done - the history and the quality they have. Bayern don’t really have any weaknesses, which is amazing considering everybody said they’re in transition, after Robben and Ribery retired. They are slightly in transition, but if you look at the team, it’s an unbelievable starting 11.

"Alphonso Davies has the potential to be one of the best left-backs in the world"Owen Hargreaves was so impressed with the display of the 19-year-old 👏You could argue he's already one of the best?#BundesligaIsBack pic.twitter.com/gQT5Vzlk9PMay 17, 2020

“A couple of years ago, people said that defensively they weren’t as strong or as quick, but now Alaba is playing as a left-sided centre back because of young Alphonso Davies, who makes the left-back position look effortless - he has the potential to be one the best in the world there. Bayern have got experience, skills, speed, flair players, creativity - they’ve got a lot.

“Haaland is really special - he makes goalscoring look easy, and it’s not. His goal against Schalke, with the ball coming across him, it just looked so comfortable. He’s ridiculously good, although Lewandowski’s pretty good too at Bayern - he scored his 40th goal of the season at the weekend.

“So even if you could add Haaland, he wouldn’t get into Bayern’s team right now, just because of the way they play with one up front.”

OH HOW WE'VE MISSED THIS GAME 😍Erling Braut Håland opens the scoring (of course he does) in fine style!#BundesligaIsBack pic.twitter.com/Th44Yp5rhJMay 16, 2020

Haaland made headlines not just for his goal against Schalke, but also his post-match interview, which ended with a series of comically brief answers.

“After the game, you and the whole team went to the famous Yellow Wall, which was empty. Why did you do that?”

“Can you tell us the message?”

The interview was shared widely online - attracting some criticism, but mainly amusement.

“I thought it was funny,” Hargreaves says. “When I watched it, it almost made me think of The Office, because it was awkward.

“He’s a kid from Norway - he speaks good English but it’s not his first language and a German journalist was asking questions in English, so it wasn’t his first language either. I think there was a slight misunderstanding with the tone of the question, and you get a short answer.

“He’s obviously very confident, but he’s also quite different. If a journalist asks a lot of questions, most of the time they know what the player is going to tell them, whereas I’m sure that journalist will never forget that interview. In the rest of his career, he probably won’t have a more memorable moment! It might not have been what people anticipated, but I think it was pretty harmless. I don’t think it was malicious.”

Haaland’s unusual approach to interviews has earned him comparisons to Zlatan Ibrahimovic. “Zlatan is a great analogy, and that’s probably what he’s moulded it on a little bit,” Hargreaves says. “His game does so much talking, like Zlatan’s did, and growing up in Scandinavia, that will have been his role model. If your stuff on the pitch is doing that much talking, you can get away with one or two quirky answers.”

BT Sport is the home of the German Bundesliga with live coverage of every game for the rest of the season. Watch on TV, the app or with the BT Sport Monthly pass

INTERVIEW How do you deal with being the most sought-after teenager in the world? Erling Haaland just scores goals