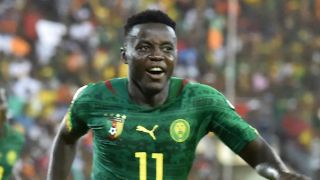 Cameroon beat Mauritania 1-0 to clinch top spot in qualifying Group M and a place at 2017 Africa Cup of Nations in Gabon.

Edgar Salli was the hero for the Indomitable Lions in Nouakchott, scoring the only goal of the game at the half-hour mark.

Tunisia recorded a 3-0 away win over Djibouti to go top of Group A, one point clear over second-placed Liberia, who have a game in hand.

Naim Sliti opened the scoring early on, before Hamdi Harbaoui netted a second in the closing stages of the first half.

Yassine Khenissi then made it three after the break to ensure victory for Tunisia, who will host Liberia in their final qualifier in September.

Already-qualified Morocco dropped points for the first time this campaign in Group F as they had to settle for a 1-1 draw with Libya.

Nabil Dirar opened the scoring after a corner kick from Hakim Ziyech, but Sand Msoud levelled the scoring in the dying seconds of the game.